Is the earth a flat disc or globe?

Answering from observations of the moon’s phases.

Perhaps surprisingly in the ‘space age’, there are still flat-earth proponents, sometimes well-meaning, continuing to challenge the idea that the earth is spherical (see A flat earth, and other nonsense). This article seeks to demonstrate that any layman can arrive at the right conclusion by observing the phases of the moon, and comparing such observations with the predictions of each of the two positions.

Perhaps surprisingly in the ‘space age’, there are still flat-earth proponents, sometimes well-meaning, continuing to challenge the idea that the earth is spherical.

The moon, just under 3,500 km wide, orbits around the earth, also west to east, at 3,680 km/hour in about 29.5 days, relative to the sun and the earth. The moon’s phases result from the moon orbiting around the rotating earth, thereby allowing different areas of the moon’s surface to be illuminated by the sun as seen from the earth. The visibility of the moon on one side of the globe-shaped earth is obstructed on the opposite side. As the earth rotates on its own axis, the moon is eventually visible across the globe during the 24-hour rotation. In any location, however, the moon is visible, for roughly up to about 12 hours. The information on the historical and future lunation (i.e. synodic monthly moon orbit) is available from Thorsen.1

The flat-earth theory is the alternative to the spherical-earth. Often motivated by a particular understanding/interpretation of the Bible, its proponents believe that the earth is a disc, covered with a plasma dome called the firmament.2 The North Pole is in the centre of the disc while the entire perimeter of the disc is the south. The dome includes the atmosphere, the sun, the moon, and stars. The theory proposes that the earth is in the centre of the universe, stationary and horizontal, and that it has limited or no gravity. Viewed from above the centre of the dome, the land area on the disc-shaped earth resembles the map of the United Nations logo.

In another model of flat-earthism, the sun circles 28 times in a month and the moon circles 27 times in a month.3 The moon phases are the results of the slower motion of the moon relative to the sun. When the moon is the full moon viewed from the northern region, the southern region witnesses the new moon. The opposite is true on the 14th day of the motions of the sun and moon. A model on the motions of the sun and moon is on a YouTube presentation, from which the full cycle of lunation data as seen from the south and north can be extracted.3 On day 1 when the southern locations see the new moon, the northern locations should see the full moon. On day 14 of the lunation, the new and full moon are reversed in the northern and southern locations, respectively.

While there are flat-earth models on the motion of the moon and sun, there are no observations to verify the models experimentally. This article reports on the observations of the moon phases in 1.5 lunations from the new moon to two full moons in five locations. These observations were used to verify the moon phases of the flat-earth and spherical-earth models following accepted scientific methodology. The locations are Perth and Auckland at 31–36°S, Singapore at 1°N, and Greensboro and Raleigh at 35–36°N. Longitudinally, Greensboro and Raleigh at about 78–79°E are almost opposite to Singapore and Perth at 103–115°W while Auckland (174°W) is close to the international dateline.

Five people in their respective locations were requested to observe the moon. Residing in Singapore, my friend and I were responsible for the Singapore location. Except for us, the observers were not told the purpose of the moon sighting, so as to maintain their neutrality. However, they were given instructions to help them to locate the moon. The measurements were the presence or absence of the moon and, if visible, photographic evidence on the moon phase.

Table 2 shows the observations for the southern locations in Singapore, Perth and Auckland and the northern locations in Greensboro and Raleigh. Blank cells indicate no observations. Cloudy sky prevented moon sighting. As we are all laymen, sighting the phases around the new moon with limited illumination as reflected from the earth and starlight was difficult. If the observed moon phase in each location matched with the moon phase predicted by the FEM, it is shaded green. If not, it is shaded red. Of the 30 observations from the south, 11 were green and matched the FEM. Of the 10 observations from the north, none matched the moon phases of the FEM. The flat-earth model tested predicted accurately only 28% of the moon phases. As a consequence, the observations rejected the hypothesis that the flat-earth theory is the status quo.

Next, we subject the same observations to the globe-earth theory. In table 3, all the 40 observations in the southern and northern locations matched the lunation 1175 and 1176 published in timeanddate.com based on the spherical-earth model.1 It was a perfect match of the predictions of the lunations. Unlike the moon phases which are opposite when viewed from the south and north in the FEM, the orbit of the moon around a spherical earth generates the same moon phase each day because the earth rotates on its own axis every 24 hours. The observations of the moon phases support the SEM as the status quo.

The observations of the moon phases support the SEM [spherical-earth model] as the status quo.

We concur with the current understanding of the SEM which explains the moon phases since the beginning of creation in an expansive space called the heaven or universe (Genesis 1:6-8, 14).

For those for whom such experimental refutation is still needed after seeing the pictures of the earth from the moon, this experiment is one more that refutes the flat-earth theory.

Dr Robert Carter measured the flight times between two points on the spherical earth and flat earth and his data also invalidated the flat-earth theory. 8 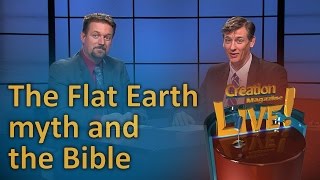