Below, we will examine the Bible’s treatment of this subject in more detail. Afterward, we will consider various strategies theistic evolutionists use to try to get around the Bible’s teaching, and explain why they do not succeed.

Theistic evolutionists say the world is still under construction.

The creation account in Genesis concludes with these words:

Nowhere on the seventh day does God say, “Let there be…” or produce anything new, as was His repeating pattern on the previous six days. Instead, the world is described as “finished”.

What was finished, exactly? The ancient Hebrews did not have a word for universe, so they combined two opposites to express the concept of totality. They viewed “the heavens and the earth” as two realms that comprise the whole of creation. (We use a similar literary device—called a merism—when we talk about searching “high and low,” meaning everywhere.) Also, to emphasize the point that everything within those realms was likewise completed, the author added: “and all the host of them.” Thus, the Bible teaches that the universe was fully furnished by Day 7. In contrast to the description given on Day 1 that the earth was initially “without form and void” (Genesis 1:2), the world now required no further forming or filling.

The meaning of “rest”

The text also says that God “rested” on Day 7, which helps to confirm that His creative work had ended. While the biblical conception of God’s rest includes more than just the notion that He stopped creating, cessation is an indispensable aspect of the meaning. The verb, to rest (שָׁבַת, shābat), used twice in Genesis 2:2–3, primarily means “to cease”.1 Another verb (נ֫וּחַ, nûha), used to describe God’s rest in Exodus 20:11, means “to settle”, as into a stable or secure position.2 So, in context, both terms indicate that God stopped the work He had been doing and transitioned to a time when He no longer performed that kind of work.

The author of Hebrews explicitly ties God’s completion of creation to human history.

To be sure, neither Hebrew term for ‘rest’ implies the absence of all activity. The Old Testament depicts God as actively ruling from His temple, for example, even as He simultaneously rests there (Psalm 132:8, 13–18). Similarly, on Day 7 God is still active—governing and blessing—but what has ceased is His creative activity.

God’s cessation is also reinforced by the fourth commandment regarding Sabbath observance. The Israelites under the Mosaic Law were instructed to imitate the pattern that God established during creation week. They were to refrain from work on the Sabbath because God “rested on the seventh day” (Exodus 20:11). That is, the Israelites ended their labor on the Sabbath because God ended His.

The NT provides even further confirmation that God’s creative activity was concluded by the seventh day. Making reference to Day 7, Hebrews 4:3 tells us that God’s “works were finished from the foundation of the world.” How could it be more clear that God stopped creating after a flurry of supernatural activity in the beginning? Also, the NT says the world was created—in the past—through Jesus (John 1:3; Colossians 1:16; Hebrews 1:2), and this is distinguished from Jesus’ present work of upholding the universe (Colossians 1:17; Hebrews 1:3). Therefore, one cannot escape the notion that the seventh day marks a division between God’s prior creative actions and His subsequent suspension of that work.3

What do theistic evolutionists say?

Despite the Bible’s clear teaching, leading theistic evolutionists declare that God’s creative work is not completed, but ongoing. BioLogos founder, Francis Collins, for example, approvingly quotes the late Theodosius Dobzhansky: “Creation is not an event that happened in 4004 BC; it is a process that began some 10 billion years ago and is still underway.”4 Likewise, Brown University professor Ken Miller claims that creation is “not a finished project, but a continuing one”.5 Another example is Wheaton College’s Robert C. Bishop, who insists that “Genesis 1 is by no means a picture of a finished, completed creation. This text describes the beginning and ongoing nature of God’s project of creation”.6

So, how do theistic evolutionists think they can get around the Bible’s teaching that God suspended His creative work?

One strategy is to blur the line between creation and providence. Theistic evolutionists have noted that the Bible refers to God as the Creator of things that originated through natural providence, long after creation week.7 For example, God creates every new generation of people (Psalm 102:18), new generations of animals (Psalm 104:30), and even the wind (Amos 4:13). It is certainly true that creation language can be applied to things that come into existence by natural means, since God set up the laws of nature which govern their production.

However, God’s initial acts of creation over six days must be understood in a different, supernatural, sense. Otherwise—if the distinction between the original creative activity and ordinary providence were eliminated altogether—the Bible would contradict itself by claiming that creation is both completed and ongoing. Therefore, this strategy cannot ultimately solve the problem for the theistic evolutionist.

Another tactic is to claim that God’s cessation of creative work is not something that occurred in a historical timeline. The Framework Hypothesis, for example, adopts this approach by maintaining that the seventh day did not occur in history, but is merely a literary device to communicate theological truths such as God’s “heavenly enthronement”.8 However, the author of Hebrews explicitly ties God’s completion of creation to human history, stating that God’s “works were finished from the foundation of the world” (Hebrews 4:3). He is referring to the world we inhabit. God’s works were finished from the time our world was founded, not in some mystical, timeless realm. In fact, the very idea that God ceased his creative works no longer has any clear meaning if it is divorced from real time and relegated to an ill-defined, “upper register” timetable, as Framework proponents would have it.9 So this strategy fails as well.

A third approach is to claim that Genesis is not describing the origin of the physical universe at all. Old Testament scholar John Walton takes this route, insisting that Genesis 1 and 2 have nothing whatever to do with the material origins of matter, stars, plants, animals, or even Adam and Eve. Instead, Walton believes that, in these chapters, God is merely announcing various functional relationships that He had previously established. Walton says that, if we think of the world as analogous to a college campus, then Genesis 1 is like a tour for new students, where they learn how everything has already been set up to serve their needs.10 In that case, when God rests, He merely ends the tour and begins the school year; He does not cease to produce material objects—because, Walton says, that’s not what Genesis is talking about.

Walton confirms that his interpretation has implications for the debate over whether creation is still happening now:

However, among the many fatal problems with Walton’s view is the fact that the NT authors clearly took Genesis to mean that God brought physical things into existence, as Walton himself may even admit.12 So, unless we abandon inerrancy, which Walton effectively does,13 we cannot deny that God’s original work of creation was about making all things—a project which He finished.

Theistic evolutionists are faced with a dilemma. If they admit that the world was completed in the past, then they must abandon their view that God used naturalistic, evolutionary processes to accomplish that work. But if they continue to insist that creation is an unfinished work in progress, they cannot be faithful to Scripture. So, which will it be? If theistic evolutionists recognize that God has spoken authoritatively in His Word, then let them believe God when He tells us that His “works were finished from the foundation of the world” (Hebrews 4:3). 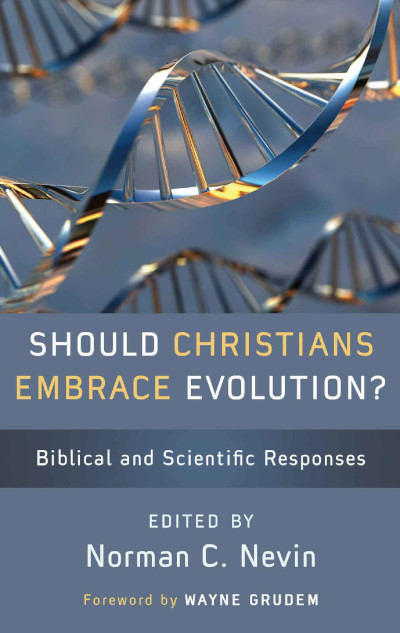 Are Miracles Scientific?
US $8.00
DVD