Has the ‘God particle’ been found?

According to a recent news item flashed around the world,1 scientists at CERN, using the Large Hadron Collider, say they have confirmed the existence of a previously hypothesized particle officially called the Higgs boson but colloquially referred to as the ‘God particle’. If confirmed subsequently by repeated experimentation, this would be a major accomplishment for science. Some might claim that confirmation of the existence of the ‘God particle’ is also confirmation of the non-existence of God, but a careful examination of the situation reveals that just the opposite is true.

What is the ‘God particle’?

It was originally proposed in 1964 as part of a mechanism to explain something else (specifically the spontaneous breaking of electroweak symmetry), but, almost as a by-product, it also provides a theoretical framework for explaining why the other elementary particles have mass. It was independently proposed by three different groups of physicists in 1964. One of these groups was a group of one, who was Peter Higgs, after whom the particle has been named.

The Standard Model does, however, provide an amazing example of super-intelligent design. There are only 3 fundamental particles, each of which comes in a few variants for a total of only 24 elementary (matter) particles.

Since it was proposed, the Higgs boson has remained very elusive despite numerous experiments looking for it. This is because it is alleged to have a very high mass and it therefore takes a lot of energy to create one. Hence the use of the Large Hadron Collider to accelerate particles travelling in opposite directions to very high energies, then bash them together and hope a Higgs pops out. One doesn’t actually see a Higgs boson since they decay extremely quickly. What is observed, it is hoped, are the products of that decay.

These experiments that seem to confirm the existence of the Higgs boson are a remarkable example of operational science at work. That is, the experimental, repeatable, observational science that tells us how things work in the present. (As opposed to historical or forensic science, which tries to work out what happened in the unrepeatable, unobservable past. This is the sort of science necessarily used to study origins. It is quite different in its methodology and in the role played by bias and personal philosophy in the interpretation applied to the data. See Naturalism, Origins and Operational Science.)

The Standard Model of particle physics

The Standard Model is a framework for understanding/explaining matter and the particulars of its interactions using only a small number of fundamental or elementary particles. Depending on just how you count these particles, there are either as few as 2 or as many as 36 of them.

At the 2 level, we have fermions (named after Enrico Fermi) and bosons (named after Satyandra Nath Bose), or, more specifically, gauge bosons. The difference between fermions and bosons is that fermions are like automobiles—only one can occupy a given quantum state at a given time—whereas bosons do not have this constraint.2

In the Standard Model, there are two types of fermions: quarks and leptons. Quarks are heavy (relatively speaking) and there are 6 of them called ‘up’, ‘down, ‘charm’, ‘strange’, ‘top’, and ‘bottom’. Odd names, perhaps, but, as a result, no one can accuse particle physicists of not having a sense of humour. Leptons, by comparison to quarks, are very light and there are also 6 of them. These have much more mundane names. They are called: ‘electron’, ‘muon’, ‘tau’, ‘electron neutrino’, ‘muon neutrino’, and ‘tau neutrino’. Each of these particles has a corresponding anti-particle, e.g. the electron corresponds to an anti-electron aka positron.

There are 4 types of gauge bosons, namely ‘photon’, ‘gluon’, ‘W’ and ‘Z’. So, if we do our count to here, there are 16 elementary particles as illustrated in the figure. 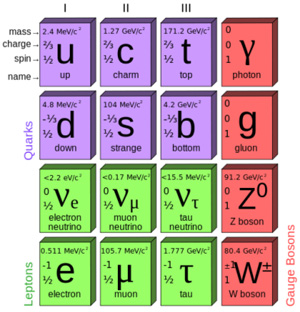 However, the fermions all have corresponding anti-matter particles, the gluon comes in 8 variants and the W boson in two (+,−), so including all these gets us to 35 particles. The Higgs boson is number 36. Interestingly, when the Z boson was named, it was called ‘Z’ because it was considered to be the last elementary particle needed by the Standard Model. Apparently not! Perhaps this illustrates just how dangerous it is to consider that anything is ‘settled science’.

However, knowing that the Higgs boson exists and what it does—and, indeed, knowing this for the other elementary particles as well—tells us nothing about how they came into existence initially or why. Answers to these questions depend on one’s worldview or presuppositions in much the same way that the interpretation of the observations of this recent experiment was based on the presupposition that the Higgs boson existed.

The Standard Model does, however, provide an amazing example of super-intelligent design. There are only 3 fundamental particles, each of which comes in a few variants for a total of only 24 elementary (matter) particles—6 quarks, 6 leptons and 12 gauge bosons. Everything in the entire universe is made up of these 3 fundamental particles in 24 variants. Think about it! There are 118 chemical elements in the periodic table which can be combined to create almost innumerable compounds like iron oxide or calcium carbonate or hydrogen hydroxide (aka water) and these can be combined to create almost innumerable substances like bubble gum and chocolate cake and amino acids and concrete and these can be combined to create even grander structures like buildings and airplanes and computers and … the human body. Yet all these things are made using just 24 different components! That sure looks like design at its best.

By comparison, there are 3,900 different LEGO® elements and 58 different colours which are combined into some 7,500 unique pieces—and LEGO has around 120 designers working full time every day to create these pieces and figure out how to use them to build things. Now there have been some pretty amazing things built out of LEGO, but every one of them needed a designer/creator. Not a single one of these structures created itself from a pile of LEGO pieces, and despite 400 million people spending 5 billion hours a year building things from 485 million LEGO elements, none of them have been living, self-replicating organisms.3 But God made the entire universe, including all of life, with just 24 unique particles and in just 6 days!

It’s perfectly within the Dominion Mandate of Genesis 1:28 to try to find a unifying concept—a simpler theory that explains many apparently disparate observations. Creationist physicist James Clerk Maxwell unified electricity and magnetism … and now the Higgs may unify even further.

Furthermore, the 12 bosons provide 3 of the 4 forces that hold everything in the universe together. Eight of them (gluons) provide the strong nuclear force that holds quarks together to form neutrons and protons and also holds the protons and neutrons together to form nuclei for atoms. Three of them provide the weak force which is involved in radioactive decay processes. One of the bosons, the photon, provides the electromagnetic force which is stronger than the weak force but weaker than the strong force—maybe should have been called the middling force. It binds electrons to nuclei in the atom and is responsible for pretty much all the phenomena we experience in daily life apart from gravity, which is the fourth and weakest force. These forces cover an incredible range of strengths. For example, the strong force is 1038 times as strong as gravity—that’s 100 million million million million million million times as strong. The forces all behave differently: gravity only attracts; the electromagnetic force both attracts and repels; both act over infinitely long distances whereas the strong force only acts within the nucleus and the weak force only in close proximity to the nucleus. Gravity accounts for the motion of the stars and planets, the electromagnetic force accounts for light travelling from the stars to earth, and the strong force keeps all the nuclei in atoms from flying apart due to the electromagnetic repulsion between the protons. Yet all this is accomplished with only 12 particles. Again, design at its best.

But that is not all. The relationship between these forces is so finely tuned that even a slight change in just one of these relationships would render the universe as we know it impossible. More excellent design.

A theory of everything?

But this is not like the arrogance of some atheists like Stephen Hawking, who for years wanted to find a ‘theory of everything’. However, he belatedly realized that this was a pipe dream because of Gödel’s incompleteness proof:4 that in any theoretical system as complex as arithmetic or above, there would always be true statements that cannot be proven within the system. Such limits to human knowledge bring to mind Ecclesiastes 3:11 which indicates that God “has put eternity into man’s heart, yet so that he cannot find out what God has done from the beginning to the end.”

The Higgs boson was capriciously nicknamed ‘the God particle’ by American physics Nobellist Leon Lederman at the insistence of his publisher5. It seemed appropriate because, as he said, the particle is “so central to the state of physics today, so crucial to our understanding of the structure of matter, yet so elusive”. (The name was certainly more marketable than what Lederman apparently originally intended to call it, the ‘godd..mn particle’ on account of its elusivity.) I think that the nickname is quite apt for other reasons. Like with God, one cannot actually see the Higgs boson but only sees the effects of its presence and deduces its reality from the observations. Also, the Higgs boson, by providing an explanation for the masses of the elementary particles, provides the explanation for all the forces that hold the universe together. And Paul tells us in his letter to the Colossians that “ … by Him [Christ, who is God] all things were created, both in the heavens and on earth … and in Him all things hold together” (Col 1:16–17).

It seems that the more science discovers, including this seeming confirmation of the existence of the Higgs boson, the more it confirms what Paul said in Romans: “For since the creation of the world His invisible attributes, His eternal power and divine nature, have been clearly seen, being understood through what has been made, so that they are without excuse”. (Rom 1:20) 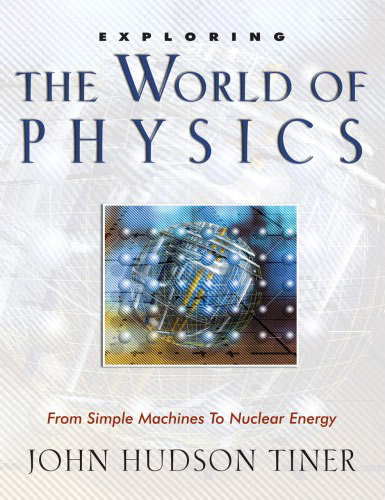 Starlight, Time and the New Physics
US $2.00
DVD
Exploring the World of Physics
by John Hudson Tiner
US $15.00
Soft Cover
Thousands ... Not Billions
by Dr Don DeYoung
US $14.00
Soft Cover