The uniformitarian ‘slow and gradual’ belief has great difficulty accounting for many of the features on the earth’s surface, called landforms. These can, however, be explained by Flood runoff.

What is a pediment?

A pediment is a flat erosion surface that slopes very gently away from a mountain front down toward the middle of the valley. They can form over relatively large areas, occasionally exceeding 300 km² (120 sq. miles) in area. It’s essentially a planation surface (= a large-scale surface planed flat by water) at the foot of a mountain, mountain range, ridge, or plateau (figure 1). Most pediments are found in valleys that were rapidly carved during the channelized phase of the Flood.2

How Noah's Flood Shaped Our Earth

Gain a new appreciation of the power, impact, and reality of Noah’s Flood—a pivotal event in the history of our planet. Beautifully illustrated. By Michael Oard and John Reed: creation.com/s/10-2-647

Pediments are common over much of the earth. Although occasionally found in wet-climate areas, they are mostly seen in dry-climate regions. These experience less erosion so the pediments are more likely to keep their original shape. Some valleys display multiple levels of pediments and pediment remnants.

That is why pediments are not seen forming today; they were carved by some past process involving huge amounts of water.

Pediments are sometimes eroded in rock that is like that found in the adjacent mountains,3 while in other areas the erosion has been restricted to the thick layers of sedimentary rock that fill the valley. Some of the early geologists thought pediments were alluvial fans, since they look similar.4 However, they were greatly surprised to discover not the unconsolidated alluvial sand, gravel and other particles they expected, but hard rock surfaces below a thin veneer of mostly rounded rocks.5 So, the pediment is a surface left after the erosion of hard rock. And the thin capping of rounded rocks provides a necessary clue to the cause of this widespread erosion. Sometimes there is no such ‘protective’ veneer at all, yet present-day erosion has not thus far destroyed the pediment, indicating the erosion event for the pediment was recent.

Pediments are often remarkably flat across the broad scale.6 The size, flatness, and abundance of these surfaces give further indication as to how they were formed. On a finer scale, channels and rills7 leading from the mountains often cut into the surfaces across a pediment (figure 2). In fact, most pediments are dissected (cut) by drainage channels that run away from the mountains,7 but the original planation surface can still be recognized by mentally filling in the channels and reconnecting the remaining undissected surfaces. Prominent geomorphologist Dohrenwend writes:

Certainly one of the most remarkable physical attributes of any pediment is the generally planar and featureless character of most (or at least part of) its surface … . Although many large pediments are generally smooth and regular with less than a few metres of local relief, a more complex morphology occurs where shallow drainageways locally incise the pediment surface into irregular patchworks of dissected and undissected topography.8

Pediments capped by a thin layer of rounded rocks

The rocks capping a pediment are sometimes up to boulder size9 and are generally rounded. Rocks are rounded by water action, so they give clear indication that water was involved in depositing the thin cap and shaping the pediment. Gravel carried by the current would act as sandpaper, eroding and smoothing the rough surface and rounding the rocks. The gravel formed the pediment, in much the same way as a planation surface.10 Figure 3 shows a pediment at the edge of the Ruby River Valley in southwest Montana. Notice that the pediment cuts against the dip11 of the sedimentary rocks at a low angle.

Erosion today is on a much smaller scale, usually no more significant than reshaping a river bank or dissecting an existing surface. The sheer size of these pediments indicates a much larger watery event than has ever been observed in history, other than the Deluge. That is why pediments are not seen forming today; they were carved by some past process involving huge amounts of water.

Uniformitarian scientists, who do not accept the biblical Flood, have attempted to explain the origin of pediments for more than 100 years and have failed, largely because pediments are not forming today. Instead we observe them being dissected and destroyed.12,13,14 Where pediments exist today, water running across them either incises them or deposits debris on their surfaces.15 Therefore, running water is not presently forming pediments. C.H. Crickmay commented:

There is no reason to suppose that any kind of wasting [erosion] ever planes an area to flatness: decrepitation [wearing, breaking down] always roughens; rain-wash, even on ground already flat and smooth, tends to furrow it [emphasis mine].16

Pediments have long been the subject of geomorphological scrutiny. Unfortunately, the net result of this long history of study is not altogether clear or cogent and has not produced a clear understanding of the processes responsible for pediment development.17

Pediments were carved very late in Noah’s Flood when deep floodwater was flowing down valleys on its way to the oceans.

Uniformitarian scientists have three main hypotheses for explaining the origin of pediments. All of them have fatal flaws. Each depends upon water issuing from the surrounding mountains and running across the surface. This is in spite of the fact that some of the rocks capping the pediments did not originate from the surrounding mountains, but originated far upvalley. Figure 4 shows a thin gravel cap of generally rounded rocks on the pediment in figure 3. Most of the rocks on this pediment are quartzite, a hard, metamorphosed sandstone. The nearest source for these quartzite rocks is over 160 km (100 miles) away. A logical explanation for the origin of pediments would be erosion by strong water currents covering a wide area and flowing parallel to the valley sides.

Pediments were carved very late in Noah’s Flood when deep floodwater was flowing down valleys on its way to the oceans. The thin capping of rounded rock was deposited as the water drained and gradually lost its momentum. The multiple pediments and pediment remnants that are seen in some valleys can be explained by pulses of valley erosion late in the runoff. They further eroded some pediments leaving a few remnants and sometimes overlaying new pediments. Figure 5 is a schematic on how pediments formed rapidly by fast eroding flows along the valley late in the Flood. Pediments are just one more example of how, despite what critics allege, evidence for the Genesis Flood is especially clear in the area of geomorphology. 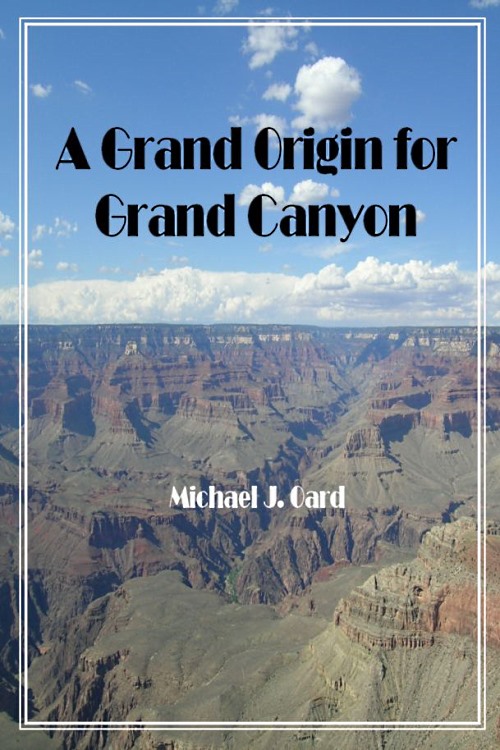 A Grand Origin for Grand Canyon
by Michael J Oard
US $6.00
eReader (.epub)