Help! I’m a teacher and my assignment is to teach evolution.

We have previously published numerous articles on creation.com (and a booklet available from our webstore) to help students with evolutionary teaching they encounter in the classroom. But what should a teacher do when he or she is required to teach evolution? C.Z. from the U.S. sought advice for just this kind of situation. Keaton Halley of CMI–US responds.

Hello, First, thank you for all you do and the material you have produced and standing on God’s Word! Now, I recently got my teaching license in ESL, and I am trying to figure out if I should work in a private or public school. I am not a Science teacher, but working in public schools as a substitute, I have seen evolutionary teaching in everything from 4-K to high school. If I work in a public school, I will have to teach evolutionary ideas, either from history or science, eventually. As an ESL teacher, I need to work with all subjects, so it would be hard for me to teach ideas that I disagree with without talking about them. I am not sure how to be a Bible-believing Christian in a public school.

Glad you are seeking wisdom in this area.

I think it is possible to be faithful as a Christian teacher in a public school, though sometimes of course a teacher may be ousted despite having done nothing wrong, so it would also be good to be strategic in your approach to avoid arousing opposition, if possible. But here is what I would suggest, if you do wind up going the public school route. The most important thing is simply not to endorse something that isn’t true. Don’t give the impression that you believe something if you do not. But this does not mean that you cannot teach about evolution. It would be a good thing for students to be aware of the ideas that are so pervasive and influential in our society. So, we at CMI have no problem with students being taught to understand evolutionary ideas. In fact, we want them to understand evolution well, because if they are using critical thinking, then they will see that there are major flaws in these ideas.

Also, here are several approaches you could use depending on the situation. I think you will have to evaluate on a case-by-case basis which approach would be most appropriate to the circumstances. And, as a substitute, you might not even have much leeway given the curriculum you are assigned, but you might be able to find times in which you can supplement what you are given.

The most important thing is simply not to endorse something that isn’t true.

1. Teach the students to understand the evolutionary ideas presented in the curriculum, without giving specific criticisms or discussing an alternative.
Don’t treat the false ideas as a fact, though. Instead, use phrases like, “many people believe … ” or, “this is the mainstream view today, which is challenged by some.” This at least alerts students that these ideas are not beyond question, and that alternative views are out there. I don’t love this approach, but it might be all you can do in some settings, and I would not regard it as being unfaithful to Christ.

2. Teach about evolution and also share some criticisms of evolutionary claims.
For example, if you are teaching about the Miller-Urey experiment, you can point out how they misrepresented atmospheric conditions allegedly present on the early earth, and that the experimental products were a far cry from life in many ways. They were not homochiral, for one thing. Or, if you’re teaching about the nebular hypothesis, you could point out that the conservation of angular momentum would predict that the sun would be spinning much faster, if this is how it really formed, so there is a major problem with this evolutionary story. This is actually an engaging way to teach, since students will have to use critical thinking to evaluate pros and cons, and think about what they themselves believe. Regardless of subject matter, good teachers use probing questions to encourage critical thinking, so here are some further suggestions about the types of questions to use:

One benefit of questions is that students can answer according to their own beliefs, religious or otherwise, without repercussions. So the spiritual aspects can enter into the discussion without you having to introduce them.

Also, note that this approach is still a modest one. It does not involve teaching positive arguments for intelligent design or biblical creation; it only looks at strengths and weaknesses of evolutionary concepts.

Find opportunities to discuss not just the scientific issues themselves, but also the philosophical assumptions that govern how evidence is interpreted.

3. Teach about evolution and its flaws, and also give positive arguments for a generic intelligent designer.
In this approach, you would not have to bring up Genesis, Adam and Eve, Noah’s Ark, etc., but could focus on how the evidence shows that an ingenious designer is behind living things, as well as the origin and fine-tuning of the universe, etc., without getting into a discussion of who the designer is. You might point to the information present in DNA, for example, and talk about how, in our repeated experience, information can always be traced back to a mind. It is not generated ultimately by an undirected process. Here too, you could compare competing explanations and let students make up their own minds. You would be helping them to think critically, not forcing them to agree with you, or even making clear to them necessarily where you stand.

4. Last, you could do all of the above, but also openly bring up ways in which the scientific questions intersect with many religious truth claims, including those found in the Bible.
It’s not inappropriate to discuss religious views in public school classrooms, though you’d want to do this in a way that’s not proselytizing. Again, this could be very good for students to develop critical thinking, and to see how ideas from different disciplines relate to one another. Here, for example, perhaps you could bring up the issue of whether death has been around for millions of years (as the long-age interpretation of the fossil record demands) or whether death only came about as a consequence of the sin of Adam and Eve, and what this would mean for all those fossil bones. Of course, this approach would be more likely to get you in hot water, so it’s a judgment call to discern how and when to go about it. But, in the right setting, this ought to be perfectly acceptable, in theory at least.

Beyond this, you might also find opportunities to discuss not just the scientific issues themselves, but also the philosophical assumptions that govern how evidence is interpreted or how science is done. For more on this, you may find the following articles helpful:

How to think (not what to think)

Why does science work at all?

I hope that helps to give you some direction. Blessings as you think through these things and seek to serve Christ in your occupation. 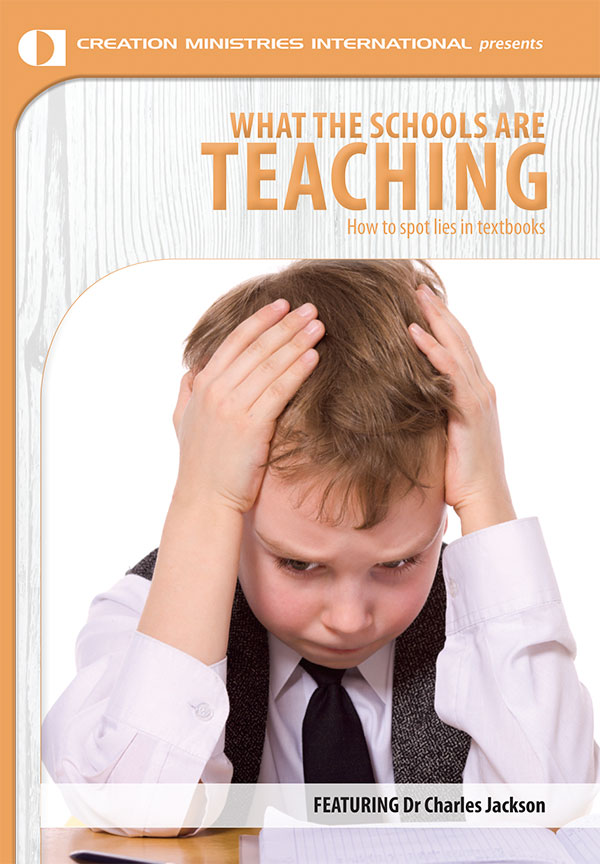 What the Schools are Teaching - Unlimited Streaming
US $7.99
Streaming Video