Dr Samuel Gan is the principal investigator and head of the Antibody & Product Development (APD) Lab in Singapore. He oversees seven staff and ten interns. They research antibody engineering, allergies, HIV drug resistance, scientific phone apps, and psychology. Dr Gan is also the founder and Managing Director of APD SKEG Pte Ltd. This company produces e-publications, workshops, and mobile apps for science. He is also an adjunct lecturer at Singapore University of Social Sciences, and at Republic Polytechnic, and is an adjunct associate professor at the Singapore campus of James Cook University (Australia). His qualifications include a B.Sc. (Hons) in molecular cell biology, a B.Sc. (Hons) in psychology, an M.Sc. (merit) in structural biology, and a Ph.D. in allergy. He has a diploma in biotechnology, a graduate certificate in academic practice, a postgraduate certificate in business administration, and certificates in commercial law & technology transfer, religious knowledge, biblical studies, and English/Mandarin translation & interpretation. He is also an Associate of King’s College, London.

For evolution to explain the diversity of life would entail impossible chance events that would never happen—even with the secular ~14-billion-year timeline.

Samuel Gan was born in Singapore. Sam’s mother was a fourth-generation Christian, who ensured he grew up attending Sunday school. He has been a churchgoer ever since and currently attends a Bible-Presbyterian church.

Sam has spoken on creation for CMI, and is part of the Singapore Friends of CMI. He has always believed that God created. But he had a ‘crisis of faith’ during his mid-teens because of a childhood interest in other world religions.

Logic and rules of things appealed to me in an uncertain world, and science was presented as having answers and being logical and rule-based. It turned out the only religion that made sense was Christianity, but I ended up with a sort of blend of secular ‘science’ and faith.

No serious scientist could believe that the complexity, order, and time-sensitive interrelationships of living things came about by chance (just physics and chemistry). And the conventional theistic evolution (‘God used evolution over billions of years’) was way too slow. But given my secular training, I came to have a confused hybrid idea involving a form of accelerated evolution during the six days of Creation Week, like millions of years happening within 6 days in some time-dilation-like model that later slowed down, due to my misinterpretation of 2 Peter 3:8. I hadn’t really thought it through!

When CMI’s Dr Carl Wieland in 2014 showed the classic slide of ‘Eden on bones’ (figure 1), in Chin Lien Bible Seminary, Singapore, this challenged Sam’s beliefs involving evolution (albeit in a sped-up form). CMI materials helped him align with God’s Word. That year he took a stand, moved back to a church that taught 6-day creation, and enrolled in Far Eastern Bible College. That provided a strong foundation on the Word of God, and it turned out to be far more important to him than all his secular education.

As small problems from secular education got resolved, I went through mini crises of faith, always returning again to God’s word.

Sickness inspired an interest in science

Sam says he was a sickly child, due to allergy, which led to him doing a Ph.D. in allergy research, specifically on IgE (Immunoglobulin E) antibodies.

I realized how little we knew about allergies, and how to treat them. We had a small breakthrough recently by taking a more holistic view beyond just analyzing antibody DNA sequences to including their molecular structure, to uncover how allergy may arise. It is just amazing that there is still much more we don’t know. It’s like for every step we take, we see another horizon added. It loudly proclaims the reality of an infinite Creator God.

As a biologist, what would Dr Gan say to the claim that evolution is necessary for science to progress?

No, certainly not. It has thrown up so many false leads that have prevented progress. For example, in our HIV mutations work, we found that even without obvious selection pressures, HIV drug resistance mutations are not random. Such knowledge can help guide us to knowing the limits of the virus resistance mechanisms and assist in the pre-emptive designing of new drugs. But by working on a premise of anything being possible left to chance, there would be no limits set in the design. So, rather than being ‘active’ in drug design, they become ‘passive’, waiting for the next drug resistance to emerge before designing drugs.

The evolution confusion, the struggles, all came from the lack of knowledge of God’s Word. It is wise to get godly wisdom as early as possible.

What would he say to the claim that evolution via mutations and natural selection explains the diversity of life on Earth?

I study one of the fastest mutating viruses—HIV. While mutations and natural selection have a role in generating some diversity, the diversity is at the micro-level—modifying existing features, not generating any new functions. Furthermore, it is mostly detrimental to the virus’s fitness. For evolution to explain the diversity of life would entail impossible chance events that would never happen—even with the secular ~14-billion-year timeline.

What role does he see for creation apologetics?

The Bible can certainly defend itself, and the Word of God does so by showing ‘Truth’. But the universal church has a duty to uphold and proclaim this to the lost, blind world. As a scientist bought by the precious blood of Christ, I have a Christian duty to show the world (especially scientists), the inerrancy of the Bible and its truth applied to the various disciplines. God referred to His creation to challenge Job. Many today do not realize that the Genesis accounts of Creation and the Fall are foundational to the Gospel. Preaching only of Christ dying on the Cross for the sins of the world is like sending people right into the climax of a movie without providing the circumstances that led to that point. But if we just teach the history of creation, many dismiss it due to the false science of evolution. Today many theologians/local churches incorrectly teach or compromise biblical creation, many wrongly indicating that a Christian just needs to know the New Testament without acknowledging much of the Old Testament. A confused layman may be helped with some fairly simple tools, such as the profound difference between experimental and historical (origins) sciences. However, for Bible-believing Christians working in a field of science that is based on incorrect premises (e.g. historical geology, biological evolution), they need guidance and illumination of the biblical worldview to remove the barriers for their faith to grow. After all, it is by knowing the Truth and respecting God’s Word that we can truly comprehend the commandments for our daily lives. Understanding, personal assent, and trust are all involved in biblical faith, and creation apologetics can allow those struggling with the faith due to falsehoods to be more confident in their faith. Bible-believing scientists can work better in their fields knowing the truth of their field in the light of Scripture. That makes them more effective witnesses and agents for evangelism, and more productive people. If we restrict the Bible to being just spiritual, allegorizing everything else, then we fail to live every aspect of our lives in accordance with the Word of God.

Dr Gan’s interests are broad and have changed over time. He says,

Because of the Bible, I got more interested in history, geology, geography, language, etc.

I asked Dr Gan what he would say to a Christian young person thinking of a career in science.

Everyone, regardless of their choice of career, should study—online or part-time—some systematic theology from a good Bible-based seminary or Bible college. The foolishness I had in my younger days would have been avoided had I had more of the wisdom of God. The evolution confusion, the struggles, all came from the lack of knowledge of God’s Word. It is wise to get godly wisdom as early as possible.

Dr Gan’s testimony demonstrates that believing in biblical creation is clearly no hindrance to a high level of achievement in science. Rather, it is a great advantage. 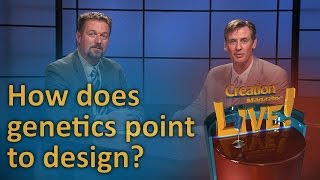 Inspiration from Creation
US $10.00
DVD
Creation, Fall, Restoration
by Andrew S Kulikovsky
US $24.00
Soft Cover
Does Evolution Explain Everything About Life?
by Philip Bell & 10 Ph.D. scientists
US $10.00
Soft Cover