On a recent visit to the American Museum of Natural History (AMNH) in New York, I encountered a sign that struck me as an embarrassment to that institution. It claimed that the human coccyx, or tailbone,

serves no purpose, but reminds us that humans have descended from ancestral animals with tails. [Emphasis added]

Serves no purpose? Really? The claim is absurd. Although evolutionists since Darwin have been foisting such nonsense on the public, anyone who bothers to investigate the role of the coccyx can see that this is not true. The coccyx does, in fact, make a valuable contribution to the human body, while its alleged derivation from tailed ancestors is based on evolutionary assumptions, not hard facts.

Evolutionists have continued to hinder science by declaring various body parts to be useless.

It is rather daft of the curators at the AMNH to assert that any feature of the human body has no purpose. How could one prove such a thing? Even if no function is known, there is always the possibility that a function exists about which one is ignorant. Plus, the evolutionists’ track record regarding alleged ‘vestigial’ body parts doesn’t inspire confidence.

In the famous ‘Scopes trial’ of 1925, evolutionists claimed there were “no less than 180 vestigial structures in the human body.”1 Since that time, functions for essentially all of these have been discovered, including important known functions for the tonsils and appendix, to cite two common examples (see Vestigial arguments: remnants of evolution and Badly designed arguments—‘vestigial organs’ revisited). Yet, evolutionists have continued to hinder science by declaring various body parts to be useless—‘junk DNA’ being a case in point. This recurring pattern of disproved claims is one reason we have advised evolutionists to avoid calling any organ ‘vestigial’ (see 21 bad arguments for biological evolution).

To what end?—The purpose of the coccyx

The problem with the AMNH exhibit goes beyond mere ignorance, however, because we actually do know that the coccyx performs a variety of functions. These are discussed in standard textbooks and websites devoted to anatomy and physiology.

For example, the coccyx and the two ischium bones of the pelvis together form a tripod that helps to bear the weight of the body and provide balance when a person is seated. As a person leans back, more weight is transferred to the coccyx.

The coccyx helps to bear the weight of the body and provide balance when a person is seated.

The coccyx also serves as an anchor for the attachment of numerous tendons, ligaments, and muscles. Some of these muscles form the hammock-like pelvic floor, which supports various internal organs, especially as we stand upright. Several muscles contribute to bowel and bladder function, including the delaying of defecation and urination—not exactly trivial abilities.

The coccyx helps to support the spinal cord as well, serving as an anchor for the filum terminale—a fibrous length of tissue that stretches from the top of the coccyx to the lower part of the spinal cord.

Beyond this, the coccyx serves an additional purpose in women—helping to accommodate childbirth. In females, the coccyx is less curved compared to males, so it doesn’t point as far forward, thus making room for a baby’s head to pass through the pelvis. It is more flexible as well, because the movements of the coccyx during labor actually help to enlarge the birth canal. All of this implicates purposeful design!

Life without the coccyx

Some evolutionists have pointed out that there are cases in which a damaged or diseased coccyx has been surgically removed, proving that the coccyx is not essential. But so what? Having a purpose and being essential are not the same thing. The fact that one can live with the loss of a pinky toe, for example, does not demonstrate that it has no function. For that matter, one can live without arms, legs, hair, teeth, and half of a brain—yet all of these parts are clearly operative in a normal, healthy body. If they are missing, either other body parts must compensate, or the body will suffer from the loss.

The same is true regarding the coccyx. This is obvious from the fact that removal of the coccyx means severing those muscles, tendons, and ligaments to which it is attached (and perhaps re-attaching them elsewhere). But personal testimonies are also available online that indicate recovery from a coccygectomy can be difficult—including pain when sitting or moving, not to mention bathroom complications.2

Since the coccyx does perform a variety of functions, there is no reason at all to suppose it is some kind of degenerate remnant of a once-functioning tail. Yes, the coccyx occupies the same position in the human body where a tail begins in other creatures, but since God gave humans a physical design that is similar to other vertebrates, our spine (a finite, linear structure, after all) must come to an end somewhere in our lower back.

And, yes—as evolutionists have pointed out elsewhere—when a human embryo develops in the womb, the spinal column initially extends well beyond the lower limbs, but this is only because it grows more quickly. The rest of the body later catches up and surpasses the end of the spine, showing that the resemblance to a tail is entirely superficial. The bones of the lower spine, incorrectly called a ‘tail’ in the embryo, are still present in the adult. It’s not as though a tail appears and is then lost before the baby is born. There never was a tail there at all!

Also, it is true that occasionally people are born with caudal appendages—odd fleshy growths extending from their lower backs which evolutionists call ‘human tails’, insisting they are throwbacks to our evolutionary history. Yet these turn out to be deformities resulting from diseases like spina bifida, when the bones and membranes around the spinal cord fail to close properly. Sometimes these growths contain muscle and even nerves that can stimulate the muscle to move, but they are produced by neurological disorders, not from dormant genes passed down to us from monkeys. There are no documented cases of these caudal appendages containing vertebrae, and they neither resemble an animal’s tail in their structure nor perform functions that an animal tail performs, such as aiding with balance or brushing away insects. To assert that they have anything to do with evolution is pure fantasy.

Given how simple it is to disprove the notion that the coccyx “serves no purpose”, it is disturbing to see that claim on display at a prominent educational institution, where the public is being misled. The coccyx clearly makes a useful contribution to the proper functioning of the body. Therefore, we call on the AMNH to correct their exhibit. We earnestly hope that the museum curators will honour the truth even if it comes at Darwin’s expense. 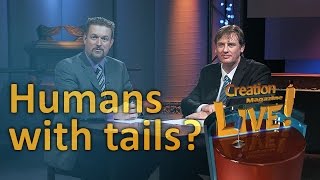 Guide to the Human Body
by Dr Randy Guliuzza
US $15.00
Hard Cover

Tailbone “Serves No Purpose”? Creation.com Article Podcast
S05E22
It appears you've already subscribed!
We've just sent you an email that will allow you to update your details.
Thanks for subscribing