From a secret US Army air base in Greenland, six P–38 Lightning fighter planes and two gigantic B–17 Flying Fortress bombers rose into the early dawn. The date was 15 July 1942, and they were headed for a British airfield to join the war against Hitler.

Heading east over the polar icecap, they ran into a massive blizzard. Flying blind, they heard that their first planned refuelling stop, in Iceland, was ‘socked in’, forcing them to return to their home base. As they approached this, however, critically low on fuel, they found that it, too, was closed. Realising that their only hope was to crash-land on the icy wastes of Greenland’s east coast, they desperately searched till they found a break in the cloud cover.

The nose-wheel of the first plane to land hit a crevasse, which caused it to flip. Fortunately, the impact on the canopy of the 8-ton P–38 was cushioned by snow, and the pilot’s injuries were minor. After they saw this, the rest of the squadron came in with their wheels up for belly landings. The planes were only lightly damaged.

All the crewmen were rescued unharmed by dogsled, about nine days later. However, the planes had to be abandoned where they had slithered to a stop.1

In the years to follow, a few people occasionally recalled the legendary Lost Squadron of 1942, but it was only in 1980 that anyone thought of a salvage mission. U.S. airplane dealer Patrick Epps told his friend, architect Richard Taylor, that the planes would be like new. “All we’d have to do is shovel the snow off the wings, fill them with gas, crank them up and fly them off into the sunset. Nothing to it.”

The P–38 Lightning was one of the deadliest planes to come out of WWII. Powered by twin Allison V–12 engines, it had one 20 mm cannon and four .50 calibre machine guns in its nose. Operational from 1941–49, the nickname given to it by German pilots, on account of its double tail, was Der Gabelschwanz Teufel (the fork-tailed devil). They are a highly prized collector’s item; only five were believed to be flying at the time the Lost Squadron P–38 was salvaged —under circa 75 m (250 ft) of solid ice!

It took the two of them many years, much money and several failed expeditions before the first real clue came. Using a sophisticated form of radar with the help of an Icelandic geophysicist, they located eight large shapes beneath the ice in 1988.

As a small, makeshift steam probe began to melt a hole in the ice, expedition members watched dumbstruck as more and more extensions were added to the hose, some 75 m (250 ft) before reaching the first airplane!

None of the discoverers thought that the planes could possibly be buried under more than a light cover of snow and ice. And why would they? After all, the impression the general public has is that the build-up of glacial ice takes very long time periods—thousands of years for just a few metres (see Siberian salamander surprise).

[Ed. note: We were not claiming that the salvagers’ perceptions were correct. Published figures of average ice accumulation rates are quite a bit lower than 1½ m/year that clearly must be true here, but not nearly as low as the salvagers thought. But it shows how much the ‘millions-of-years’ ideas have permeated into the general public, and the point of this article was to undermine this common preconception, as the subtitle should make clear].

In fact, ice cores in Greenland are used for dating, based on the belief that layers containing varying isotope ratios were laid down, somewhat like the rings of a tree, over many tens of thousands of years.2

It is the same sort of conditioning which makes many people instinctively think in terms of millions of years for coral reef growth, for stalactites to form, and so on. This is despite ample demonstrations that these things do not need vast time periods.3,4,5

Epps and Taylor realised that it would be impossible to dig or blast through this astonishing depth of solid ice, which had built up in less than 50 years. They returned in 1990 with a low-tech implement called a super gopher. This five-foot-high device, wound with copper coils through which hot water is pumped, melted a four-foot-wide shaft into the ice at about two feet an hour until it struck the wing of a B–17. A worker lowered down the shaft then used a hot water hose to make a cavern around the plane. To their disappointment, the huge bomber was crushed and mangled, beyond worthwhile salvage.

Dejected, the pair returned home. However, only a month later they realised that the more solidly-built P-38s would have had a much better chance of having survived the ice’s weight. In May, 1992, they returned with fresh financing from investors in a high-precision effort. True to expectations, the P–38 they located seemed in superb condition.

The planes under the ice were in exactly the same pattern in which they had landed—except they had been moved (by glacial flow) three miles from their original location!

After many weeks of intense effort, the wings and fuselage were brought to the surface through a large opening made by using the ‘gopher’ to sink four more holes side by side. The pieces were helicoptered to a Greenland port, then sea-freighted to the US for final restoration. This turned out to be more difficult than imagined, as the plane had actually been more damaged by the crushing weight than met the eye. However, when operational again, it will be using around 80% of its original parts. Interestingly, the planes under the ice were in exactly the same pattern in which they had landed—except they had been moved (by glacial flow) three miles from their original location!

Evolutionists and other long-agers often say that ‘the present is the key to the past’. In that case, the 3000-m-long ice core [brought up by the joint European Greenland Ice-core Project (GRIP) in Greenland in 1990–1992] would only represent some 2,000 years of accumulation. Allowing of course for compression of lower layers, (which is also offset by the inevitable aftermath of a global Flood, namely much greater precipitation and snowfall for a few centuries6) there is ample time in the 4,000 or so years since Noah’s day for the existing amounts of ice to have built up—even under today’s generally non-catastrophic conditions.

As usual, it is not the facts which speak against the Biblical account of a recent creation, but the mindset of our culture. ‘Millions of years’ are casually tossed around so often that we unconsciously perceive all natural changes as taking long timespans. That is why many are ‘amazed’ to hear of facts like 180 m (600 ft) of layered sedimentary rock built up in months after the Mount St Helens eruption on 18 May 1980.7 Or when hearing of real precious opal formed in months,8 or coal from simple heating of wood in mere months.9 Or about the flag, tent and sledge left at the South Pole by Antarctic explorer Amundsen in 1911 now being more than 12 m (40 ft) under the ice,10 or this deeply buried lost squadron.

However, we should really not be surprised when the facts show that things generally happen more quickly than expected within the old-earth mindset, since ‘ Thy word is true from the beginning: and every one of thy righteous judgments endureth for ever ’ (Psalm 119:160).

In the frozen wastes of Siberia, an amazing salamander is able to survive in suspended animation for years, deep-frozen at temperatures as low as –50°C, only to thaw out and run off afterwards. Scientists are not yet sure of the exact mechanism, but, like some other animals, they almost certainly produce ‘anti-freeze’ chemicals to replace water in their tissues and cells.

Some have been found buried in ice which is believed to be from the Pleistocene Age—12,000 years ago by evolutionary reckoning. Yet they still recovered when thawed out! Though researchers have discussed the idea of radiocarbon dating to test the idea that they could possibly be that old, they say that the creatures ‘probably fell to this depth much later, through deep cracks in the permafrost’.12

Whether so or not, the belief that ice layers only 14 m (46 ft) down are many thousands of years old, in light of the ‘Lost Squadron’ experience, cannot be taken for granted.

Addendum: would planes sink into ice?

A number of readers have contacted Creation magazine about the sensational information in this article. Recalling the common school experiment in which a wire tensioned with weights ‘sinks’ through a block of ice, some wondered whether the planes could have sunk to that depth. However, the wire sinks through the ice in the experiment only if it is done at room temperature. Do the same experiment with the whole apparatus in a freezer, which would mimic the situation with the planes, and it does not work.11 The common explanation for the wire/ice experiment that the pressure of the wire melts the ice is wrong—such a device does not generate enough pressure to melt the ice [see The wonders of water, in the section ‘Why is ice so slippery?’, for further discussion]. Heat transferred from the air in the room by the metallic wire, which is an efficient conductor of heat, melts the ice, which is a poor heat conductor, to allow the wire to ‘cut’ through.

It is true that the pressures involved would not cause the planes to descend through the ice but there is a simpler and more visual way to determine whether this has happened or not. To attain forward directional stability, aircraft must have their centre of mass ahead of what is termed their ‘aerodynamic center’. The centre of mass is moved forwards by siting engines and other heavy elements towards the front and adding control surfaces such as tail fins whose surface area pulls the aerodynamic centre to the rear. A simpler equivalent is the arrow (weight in the nose, flights at the rear) which attains forward directional stability by the same means.

The consequence is that, barring control mechanisms acting, an arrow or aircraft will pitch forward and fall nose-down when allowed to fall freely through a medium—whether air, water or ice. So if the aircraft had indeed moved through the ice, they would all have been found in the same nose-down position. They were not.

So the planes could not have sunk through the ice; they were buried by the accumulation of snow (which becomes ice as it is compacted). 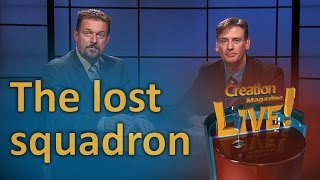