Were “the waters above” a vapour canopy?

(Adapted from the author’s The Genesis Account. A theological, historical, and scientific commentary on Genesis 1–11, ch. 6, 2015.

The ‘waters above’ is one of the most difficult aspects of the account of creation to elucidate, since there is so little biblical data. Many commentators have concluded that the expanse (‘firmament’ in some older translations) is the atmosphere and the ‘waters above’ the clouds, e.g. H.C. Leupold (1891–1972), Professor of Old Testament Exegesis in the Capital University Seminary, Columbus, Ohio:

For most of church history, no one had seen a canopy in the actual text of Scripture, yet God specifically wrote Scripture to teach, i.e. to be understandable (2 Timothy 3:15–17).

Others disagree, because Genesis 1:17 says that the sun, moon, and stars (luminaries) were in the expanse, so the expanse must be interstellar space. Physicist Russell Humphreys thus argues that the ‘waters above’ must be beyond the luminaries, so at the boundaries of the visible universe, while the atmosphere is the “face” of the expanse.2

But the older view could still be right as ordinary phenomenological language: For example, ‘I saw a bird in the window’ doesn’t mean that the bird is in the pane of glass or even in the space enclosed by the window frame, but in the line of sight through this space.3

Not a vapour canopy

The landmark book The Genesis Flood by Whitcomb and Morris (1961)4 is probably the single factor most responsible for the worldwide revival, beginning last century, of biblical creation as taught by the Church for its first 1,800 years.5 One of the book’s best known innovations was the ‘vapour canopy model’ as an explanation of the source of the floodwaters of Noah’s day. This asserts that the ‘waters above’ referred to a canopy of water vapour floating above Earth’s atmosphere. In this model, this canopy condensed and collapsed to provide the rain for the Flood.

A few decades ago, this was very popular—for good reason, since it seemed to explain many things about rain, rainbows, and longevity. It also went with the idea of many biblical creationists at the time that the Bible teaches no rain or rainbows before the Flood.

One problem was that some creationists gave the impression that it was a direct teaching of Scripture; CMI cautioned against such dogmatism back in 1989 when the model was still very popular among many creationist writers.7 After all, for most of church history, no one had seen a canopy in the actual text of Scripture, yet God specifically wrote Scripture to teach, i.e. to be understandable (2 Timothy 3:15–17).

A worse problem is that it seems to contradict Scripture itself. Humphreys8 cites Psalm 148:1–4:

The major scientific problem with the canopy theory—a water vapour canopy thick enough to provide more than about a metre’s worth of floodwater would cook the earth.

Praise YHWH from the heavens;

praise him in the heights!

Praise him, all his angels;

praise him, all his hosts!

Praise him, sun and moon,

praise him, all you shining stars!

Praise him, you highest heavens,

and you waters above the heavens!

Let them praise the name of YHWH!

For he commanded and they were created.

And he established them forever and ever;

he gave a decree, and it shall not pass away.

But if the waters are to endure “forever and ever” above the heavens, then they can’t have collapsed.

Another problem is with the order of events causing the Flood. In the Bible, the first cause for the Flood was “all the fountains of the great deep burst forth” and the second was “the windows of the heavens were opened” (Genesis 7:11). Keil and Delitzsch comment:

The same day were all the fountains of the great deep (תְּה֣וֹם tehôm the unfathomable ocean) broken up, and the sluices (windows, lattices) of heaven opened, and there was (happened, came) pouring rain (גֶּשֶׁם geshem) in distinction from מָטַר [mātār] upon the earth 40 days and 40 nights. Thus the flood was produced by the bursting forth of fountains hidden within the earth, which drove seas and rivers above their banks, and by rain which continued incessantly for 40 days and 40 nights.9

Thus the Flood began with fountains in the sea and other deep parts of the earth, and only secondarily from the rain. But the canopy theory has the Flood beginning with the rain from condensing vapour.

Many of the arguments for the canopy were faulty on scientific grounds. For example, one argument is that the canopy would have protected humanity from damaging radiation, so explaining the extremely long patriarchal lifespans pre-Flood in Genesis. But water, as vapour or even as liquid, is not a great shield for UV—you can be sunburned on a cloudy day and while swimming.

When it comes to cosmic radiation, there is no evidence that this is involved in aging. One obvious problem is that Noah lived over a third of his life after the Flood but still lived to 950, the third-longest recorded lifespan in history. The real explanation of longevity and its sharp decline seems to be the exponential decay of genetic fitness that follows a population bottleneck as per the Flood, as well as Noah’s extreme age at fatherhood.10

What water absorbs very well is infrared, as any vibrational spectroscopist knows (this was a major part of my Ph.D. work). Water vapour is actually a far more important ‘greenhouse gas’ than CO2, accounting for about 66% of the atmospheric ‘greenhouse effect’ on earth, or maybe even as much as 95%. This leads to the major scientific problem with the canopy theory—a water vapour canopy thick enough to provide more than about a metre’s worth of floodwater would cook the earth.11

In summary, the vapour canopy model is no longer advocated by virtually all creation apologists and organizations of note. This is because both the model and the arguments thought to be in its favour have substantial biblical and scientific problems.

The second day of Creation Week is unique, in that God doesn’t call this ‘good’. The reason appears to be that God’s separation of the waters is twofold:

first, the expanse separating the waters below from the waters above—Day 2; second, separation of the waters below into the seas allowing the dry land to appear—Day 3. So God doesn’t declare this good after the incomplete separation on Day 2, but only after the twofold separation is complete, on Day 3. Then God makes up for the lack in Day 2 to declare goodness twice on Day 3—once more, after He made the vegetation. Leupold explains: 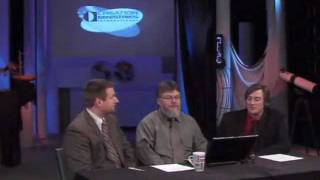