Back to the beginning1

To many professing Christians, the view that the first few chapters of Genesis record true history is akin to believing a fairy tale. Rather than accept the account of creation and human history affirmed by Christ and His apostles, they choose instead to embrace the teaching of atheists and God-haters. For instance:

Ignoring Christ’s warnings to beware following the crowd (Matthew 7:13), they resolutely side with the majority, sacrificing the word of God on the altar of man’s ‘knowledge’.

Ignoring Christ’s warnings to beware following the crowd (Matthew 7:13), they resolutely side with the majority, sacrificing the word of God on the altar of man’s ‘knowledge’. In consequence, foundational Christian doctrines, such as the goodness of God, become abstract concepts rather than solid truths. Others, such as original sin and man’s responsibility for the state of the world, are even denied. The justification for holding these demonstrably antibiblical views is that science has supposedly shown them to be true. The reality, however, is that this ‘science’ is as indefensible as the theology it promotes: the known facts of science fit the biblical account of creation and Earth history far better than they fit the theory of evolution.

According to the atheists’ creation story, the universe began with the ‘big bang’. Few, however, are aware of the enormous blind faith required to believe this. How could nothing produce a universe? Recently, Professor Richard Dawkins had something to say about this:

Do you get that? He says that the universe came from nothing but then argues, “Something pretty mysterious had to give rise to the origin of the universe.” He seems rather confused.

According to Oxford University’s Professor Roger Penrose, the probability of the big bang producing a universe like ours by chance (that is with the required state of order) is around 1 divided by 101023.4 This probability is so low it cannot be adequately described. It makes 1 divided by the number of atoms in a trillion trillion trillion universes look like an exceedingly high probability. Unperturbed, some secular cosmologists claim they have an answer to this problem. They say that there must be an enormous number of universes (perhaps even an infinite number) and, of these, one just happened to come out right—the one we live in! However, since we observe just one universe, this is really science fiction rather than science fact. The truth is that scientists do not know of any natural event that could create a universe—let alone an ordered universe like ours. Known science, therefore, points to a supernatural event such as we read of in the Bible: “In the beginning God created the heavens and the earth” (Genesis 1:1). To believe this is far more reasonable than the atheists’ creation story.

Life beginning all by itself?

After the big bang, we’re told, life spontaneously arose from ordinary chemicals. But even the most ardent evolutionists will admit that they cannot explain how this could have happened. When asked whether he had any idea how life started, Richard Dawkins replied, “No, nor has anybody.”5 This is because the known laws of chemistry indicate that the molecules needed for life would never form; rather they would rapidly fall apart over time. Moreover, these molecules carry information and software which no known natural processes can generate. This is because no one knows how the programming needed for all life could appear. As far as observation goes, one needs either a pre-existing program, or a source of intelligence. Known science, therefore, again points to a supernatural origin for the living world.

Evolutionists tell us that the fossils in the rocks tell the story of millions of years of evolution, of microbes gradually turning into men. However, not only are the transitional fossils systematically absent, but many geological observations point to the rocks having been formed rapidly in flood conditions, rather than slowly over aeons of time. Some rock layers stretch all the way across continents, such as the Tapeats Sandstone which covers much of North America. The chalk beds of England can be traced all the way across Europe to the Middle East; the same limestone rocks stretch from Portugal through Southern France, and all the way to the Caucasus.6 The scale of these formations points to a massive watery catastrophe on a global scale, rather than the localised slow deposition of sediments we see today.

Many fossils taken from rocks supposedly millions of years old appear almost identical to living creatures. These are known as ‘living fossils’ and are a major problem for the theory of evolution. The evolutionary process is supposedly so powerful that it can change ape-like creatures into humans in just five or six million years; yet it appears unable to change some creatures in tens or even hundreds of millions of years. Some dinosaur remains contain soft, flexible tissues, proteins and even DNA indicating that they cannot possibly be millions of years old. These, along with the many fossil graveyards, again point to the truth of the Bible which teaches that there was a global Flood in recent history.

Anthropology and the Bible

Evolutionists tell us that similarities between human and chimp DNA provide strong evidence that humans and apes evolved from a common ancestor. Indeed, they claim, we’re mostly ape! However, we share 50% of our DNA with bananas but that hardly makes us half banana. In reality, the science of genetics confirms what the Bible says about human origins. Even secular geneticists admit that DNA analyses indicate that the whole of humanity is descended from one man and one woman. (They would, of course, dispute that these two lived at the same time and that no other men or women were living at the time—but they can’t prove this!)

While the study of anthropology offers little comfort for evolutionists, it provides much for those who have put their trust in God’s word. Legends of creation and a global Flood, which are remarkably similar to Genesis, are found in cultures throughout the world.

While the study of anthropology offers little comfort for evolutionists, it provides much for those who have put their trust in God’s word. Legends of creation and a global Flood, which are remarkably similar to Genesis, are found in cultures throughout the world. From the Island of Tahiti to the Eskimos of Point Barrow, Alaska to the Ewe-speaking tribes of Togo, tradition has it that the first man was made from the earth (see Genesis 2:7). One Central American legend, discovered in one of the ancient Aztec holy books, states that a great flood occurred 1716 years after the world had been created7 and covered the Earth’s highest mountains to a depth of 15 cubits. It also gives an account of a confusion of languages following the erection of a high tower and the subsequent dispersal of mankind throughout the Earth.8

All this is exactly what we would expect if humanity had dispersed from Babel around 4,000 years ago, as the Bible teaches. It is not what we would expect if mankind had evolved and dispersed out of Africa between 60,000 to 100,000 years ago, as the theory of evolution maintains. Would similar legends containing such details, and handed down largely by word of mouth, have survived for tens of thousands of years?

Studies of population growth rates present another major problem for evolutionists. Where are all the people if mankind has been reproducing for all the millennia they claim? Calculations show that the current world population of seven billion is more or less what we would expect if three reproducing couples stepped off the Ark around 4,350 years ago (Genesis 9:18-19). Similar calculations applied to the evolutionary time scale would predict a population today of around two hundred trillion trillion, even assuming a particular low population growth rate.9

Linguistics and the Bible

The study of languages also confirms biblical history. It is not possible to trace the world’s languages back to one or two original tongues, as would be expected from evolutionary theory. Instead linguists recognise at most a few dozen distinct and unconnected language families—consistent with the account of the confusion of languages at Babel (Genesis 11).10

When Charles Darwin visited Tierra del Fuego right at the tip of South America, he came across some Fuegians whom he regarded as savages, examples of significantly less evolved humans. He wrote of their language that it “scarcely deserves to be called articulate” and that “the cries of domestic animals are far more intelligible.” But he could not have been more wrong. The reality is that the Fuegian’s language was much richer and more expressive than English. A first attempt at a Fuegian dictionary contained 32,000 words and inflections. They had words for more than five different types of snow and fifty different words for family relationships. On that basis you’d have to say they were more evolved than the British, thus defying Darwin’s views that they were less evolved people.

Genesis—the foundation of our faith

At Creation Ministries International we seek to equip the church to expose the folly of secular thinking, to declare the truth of the Bible, and to demolish “every pretension that sets itself up against the knowledge of God” (2 Corinthians 10:5). We affirm the historicity of Holy Scripture and show how this is unquestioningly supported rather than undermined by science. Christian doctrine is demonstrably grounded upon facts recorded in the book of Genesis, thus providing a sure foundation for our faith. 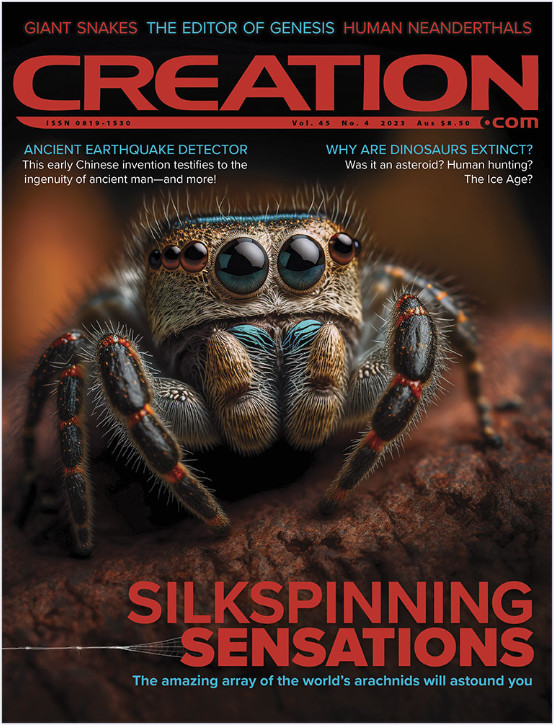