Spiral galaxies: too many for the big bang

Dark matter would cause galaxy collisions, meaning galaxies like our own should be extremely rare.

A recent study1 from the university of Bonn shows that the standard big bang model (ΛCDM) does not predict the observed number of ‘late type,’ galaxies (see Galaxy Classification box) like our own.

… the simulations are unable to produce bulgeless disk galaxies, yet many are observed.

The galaxy we live in, the Milky Way, is a ‘late-type’ galaxy, as are most of the galaxies in the local universe.2 These galaxies are rotation dominated (star motion is predominantly circular) as opposed to the ‘early-type’ galaxies which are dispersion dominated (star motion is random). Late type galaxies possess a prominent disk (see Figure 1). The Sloan Digital Sky Survey shows that about 80% of local universe galaxies are either spiral or lenticular in their structure (i.e. late-type).

The other major problem is galaxy collisions. In the standard model, every galaxy is surrounded by a halo (see figure 1) consisting of dispersed stars and dark matter. Although dark matter is invisible to electromagnetic radiation, it supposedly interacts weakly with matter and itself. And because galaxies are ~ 90% dark matter, this hypothetical halo exerts a strong gravitational pull on nearby galaxies.

The University of Bonn researchers found that the observed universe is so different to that predicted by the big bang that the chance that the standard model could produce the observed galaxies, is miniscule, 1 in 2.9*1036 (effectively zero).

It is thought3 that large galaxies can absorb smaller ones without greatly affecting the structure of the larger galaxy. But if merging galaxies are similar in size (like the Milky Way and Andromeda), the resulting stellar disk will considerably thicken and the bulge component will grow (see figure 1), often to the point where the galaxy is then considered an elliptical galaxy, rather than a spiral. This is because the collisions reduce the angular momentum needed to keep the disc shape.

Modern cosmology simulations suggest that mergers should be very common: 95% of galaxies should have undergone mergers in the last 10 billion years4 and 69% of galaxies with a similar halo mass should have had at least one major merger in the big bang’s history5. It is therefore difficult to explain the large number of observed bulgeless disk galaxies: they have somehow managed to retain their angular momentum!

In the observed universe 50% of late type (spiral and lenticular) galaxies do not have a big, merger-built bulge.6 i.e. the observed bulge is too small to indicate that the galaxy has been through a merger. The University of Bonn researchers found that the observed universe is so different to that predicted by the big bang that the chance that the standard model could produce the observed galaxies7, is miniscule, 1 in 2.9*1036 (effectively zero).

… there is room for a Biblical cosmology with a recent fiat creation to better explain the phenomena of flat galaxy rotation curves and the abundance of flat disk-shaped galaxies.

Either the merger history is not correct, and thereby the standard model of cosmology is incorrect (as the researchers suggest) or the time elapsed is not sufficient for the mergers to occur.

A Biblical creationist would certainly entertain both options, but the University of Bonn researchers are tied to a naturalistic worldview and therefore suggest only that the standard model of cosmology is incorrect. They prefer the Modified Newtonian Dynamics (MOND) theory as a better explanation for the observations. MOND, first proposed in 1983, does away with the need for dark matter, and therefore the strong gravitational attraction between dark matter halos which produce the large number of galaxy mergers in the standard model.

MOND has its own problems, and the ΛCDM (standard) model is still the dominant cosmological model in mainstream science. Whilst secular scientists work on trying to improve these two models, there is room for a Biblical cosmology with a recent fiat creation to better explain the phenomena of flat galaxy rotation curves and the abundance of flat disk-shaped galaxies.

In all our studies and simulations, one must remember that cosmology is an historical science, as James Gunn of Princeton University said: ‘‘A basic tenet of science is that you can do repeatable experiments, and you can’t do that in cosmology.’”8

The astronomer, Edwin Hubble, was the first to classify galaxies based on their morphology, and he came up with the following categories (red are early type):

The Hubble tuning fork (figure 2) was originally thought to be an evolutionary sequence, where galaxies evolve from basic morphologies to more intricate ones. Ellipticals where therefore termed Early Galaxies, and Spiral and Irregular galaxies were known as late-type galaxies.

Although it is now thought that if galaxies do evolve, they evolve from right to left (figure 2), the terms early and late-type have stuck. 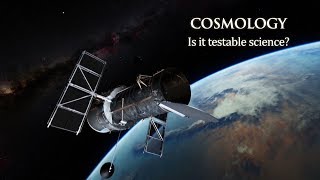