At the cutting edge of creation evangelism

How one couple’s outreach impacts many

A small team of Australian creation evangelists led by Ian and Heather Hartley has had a lasting impact at many community events in their state.

One outreach was at Gemfest, an annual gemstones exhibition held at Anakie, a small town in one of the world’s largest sapphire fields in an area known as The Gemfields. Also popular with fossickers and tourists, it is about 900 km (560 miles) by road from Brisbane, the State capital of Queensland.

Although the four-day event is focused primarily on sapphires, other gems such as diamonds, pearls, zircons, and opals are on display along with gold, crystals, minerals, and, of course, fossils.

This was not the first time the Hartleys had attended the event and the display that challenges millions of years of geological time again drew the attention of many Gemfest visitors.

Along with the Hartleys, the creation.com team included people from various backgrounds including farming, the gas industry and chaplaincy. Some had been to the 2016 event and, because Queensland is bigger in area than Alaska1, several of them had to drive many hours to the location.

The display included a cardboard model of Noah’s Ark, an inflatable dinosaur, crystals made in a few days from naturally occurring chemicals, and various CMI materials including magazines, books and DVDs.

The team interacted with hundreds of people and had many varied and challenging conversations that ranged from deeply personal one-on-one spiritual encounters to open hostility from a small number of individuals.

Conversation starters included: “Do you think dinosaurs died out 65 million years ago?”; “What do you think this object represents?” pointing to the model of Noah’s Ark; and “Can science prove the age of the earth?”

Ian and Heather have observed over the years that most people really don’t have a strong opinion on evolution, but when presented with an alternative (biblical creation), are prepared to consider that evidence.

“It’s usually only the diehard atheists or rusted-on evolutionists who want to disagree,” Ian said. So, it was no surprise when they encountered their first ‘prickly customer’ at Gemfest. Ian said: “A policeman insisted that speciation was evolution in fruit flies and I responded with the biblical position that all animals reproduced after their own kind.”

Another man who insisted Aborigines had been in Australia for 55,000 years argued against Ian’s challenge on dating methods and, when offered a DVD, he took and destroyed it. Such a reaction is a reminder of the spiritual dimension of such encounters. This is a battle for the truth and authority of the Bible and, ultimately, for a person’s soul.

In contrast, a lady who was initially unhappy about the display softened her approach after a conversation about dinosaurs, and gladly accepted a magazine, some books and a DVD.

A young woman who had been at the event the previous year and talked with the team had been challenged by a creation Gospel message. She visited again and announced that she had been baptised the previous week and also said, “Last year changed my life”.

In another conversation, one of the team was able to witness at length about Creation, Christ and Redemption while another prayed nearby.

The display of crystals that Heather Hartley prepared drew plenty of attention and led to discussions on deep time and dating methods. A leaflet dealing with radiometric dating proved very popular.

A number of small New Testaments were given away—one to an Islamic teenager—as well as two complete Bibles, one to a lady who was greatly moved by the gesture. She stayed for about an hour and took several other creation resources.

She visited again and announced that she had been baptised the previous week and also said, “Last year changed my life”.

The dozen or so team members said they were keen to attend the event again next year.

After the Gemfest event, Ian and Heather Hartley drove about 480 km (300 miles) north to the gold-mining town of Charters Towers where they again set up a stall at a community fair.

Using a similar approach as they had done at Gemfest with the Ark model, etc., on display, the Hartleys engaged fairgoers in various conversations about the creation-evolution issue, and the big questions of life.

Schoolchildren showed most interest. Heather had a prolonged conversation with three young women from a Christian school who were thoroughly evolutionized. After discussing at length how to interpret scientific evidence, they started to see the logic of the creation approach and each took away leaflets, magazines, and a Busting Myths book and Rod’s Ark DVD.

In all, the Hartleys gave away 96 showbags, 36 magazines, six How Darwin Got it Wrong DVDs, one Fallout DVD, several Busting Myths books, seven Bibles and assorted tracts and DVDs.

The Hartleys have for several years attended various community events in Australia—such as agricultural shows. Their experience is that the visual impact of a stall that includes dinosaurs, a model of Noah’s Ark, and posters on scientific evidence for creation draws in countless people.

People are curious and that curiosity leads them to asking questions which in turn gives the opportunity to “put a stone in their shoes”—as Ian puts it—by challenging them with a snippet of truth about creation.

People are curious and that curiosity leads them to asking questions…

Ian said people don’t mind telling a lie, but they do object strenuously to being lied to. “If you can show people they’re being lied to in school, university, and newspapers, they get indignant,” he said.

The Hartleys can look back over several years of doing ‘show’ ministry and reflect on how they became involved by ‘chance’. While their knowledge continues to grow, they stress that with even a rudimentary understanding of the evidence for creation, a Christian knows vastly more on the subject than the person to whom they are speaking.

Once conversations start, almost everyone will take a magazine after asking a few questions. As Ian says, “All the things we do are ‘take it or leave it’. Sometimes when people don’t show much interest and you pull the magazine back, they actually take it.”

The type of interactions the Hartleys experience is a stark reminder of how entrenched evolutionary ideas are in people’s minds, sometimes causing them to dismiss the Bible without consideration. But creation outreach and impact changes that, and is testimony to the effectiveness of the creation message.

In our evolutionized, secular culture it is important that the stall avoid churchy images and jargon. That’s the main reason it concentrates on dinosaurs, Noah’s Ark, crystals, and posters with interesting scientific information.

This arouses people’s curiosity and can lead to profound conversations. It is also important to give people something to read or watch later when they have the time. They then can process the information at their own pace.

To begin with creation in order to lead people to Christ may seem a revolutionary evangelistic strategy in our day and age. However, it is the way the Apostle Paul worked when evangelizing Gentiles (Acts 13:14–18; 17:22–31). And the Hartleys have demonstrated that it is a very effective approach to engaging our culture and leading people to Christ. 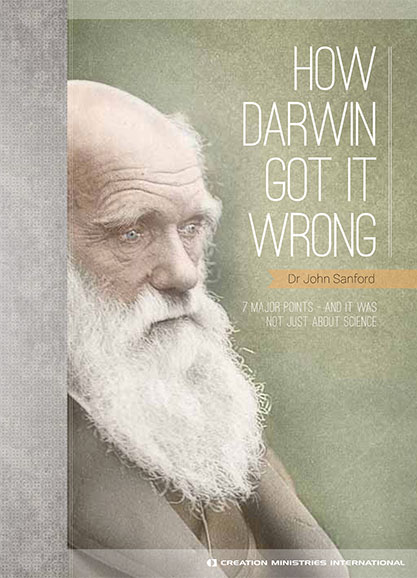