Why I’m finally a young-earth creationist

CMI was invited to write a response to an article in Premier Christianity magazine by Dr Luke Barnes, Why I’m no longer a young earth creationist.1 CMI’s Dr Jim Mason shared his own story, and explained why he believes a “plain reading” of Genesis leads to the biblical creationist (‘young earth’) viewpoint.2 CMI gratefully acknowledges Premier Christianity for that invitation, and for permission to republish Dr Mason’s article here.3

I grew up attending church regularly in a ‘mainstream’ denomination. I learned all the usual fascinating Bible stories—Creation in six days, garden of Eden, Adam and Eve, the serpent, the Flood, etc. However, in retrospect, I never heard the gospel message. So when I graduated secondary school, at which point it was tradition to ‘join the church’, ‘the church’ seemed to be just a social club. Since I was about to go off to university in another town, I declined.

Off I went (in 1960 as a 17-year-old) to study engineering physics. In first year, we had a geology course. Here I was taught, with certitude, that the geological column had been deposited over hundreds of millions of years by slow and gradual processes operating at the same rate as observed today. This wasn’t what I had been told in Sunday school but, since the professor was the authority, I just accepted everything he said without question.

Truth is not determined by the number of people that believe something to be true.

There were no courses in biology, palaeontology, evolution, or cosmology for us engineering freshmen. However, I had been given a subscription to Scientific American and there were many such articles in it. These were all fascinating but contradictory to those Bible stories. Again in deference to the presumed authority of the authors, I just assumed that they were correct.4

By about mid-year, I’d made a conscious decision that all those Bible stories, while fascinating, were completely wrong. Therefore, the rest of the Bible also must be wrong, meaning that God did not exist. Moreover, being absolutely certain that I was right, I was not shy about declaring my position as an atheist.

And so I remained for over a decade, completing both that BSc in engineering physics and a PhD in experimental nuclear physics.

Then, in response to one of life’s ‘curve balls’, I was confronted by the C.S. Lewis question: ‘Was Jesus a madman, a conman, or the God-man?’5 Being a practising engineer by this time, I decided that this question had to be answered on the basis of evidence. Eventually I concluded that—contrary to my expectation—the evidence overwhelmingly showed that He was the God-man.6

Another decade passed with regular church attendance. But again, I never heard the gospel presented cogently. In fact, I distinctly recall pondering why sermons were predominantly from books other than the Bible.

Finally, after accepting an invitation by some friends to attend their Bible-believing church, I finally heard the gospel message. After several weeks of wrestling with the Holy Spirit, I committed to Christ and was born again.7

Now I understood the gospel, so succinctly expressed in Romans 5:12, John 3:16, and 1 Corinthians 15:22: “… sin came into the world through one man, and death through sin, and so death spread to all men because all sinned.” However, “God so loved the world, that he gave his only Son, that whoever believes in him should not perish but have eternal life.” “For as in Adam all die, so also in Christ shall all be made alive.”8

At this point, although saved, I was “double-minded” (James 1:8). That is, I accepted God’s gift of eternal life with its implications that the Bible is true, but continued to accept evolution (in its broadest sense) and big bang cosmology, even though they both contradict a plain reading of the Bible. Various schemes had already been concocted to ‘interpret’ the Bible to mean something other than what it plainly says, to ‘resolve’ these discrepancies. I was unaware of these at the time, so cannot say which one I used. I suspect it was an amalgam of them all. However, I knew that there were significant questions about this discrepancy to which I did not have reasonable answers. Consequently, I was never as outspoken about my Christian faith as I had been about my atheism.

Another decade passed. Then, on a whim, I attended a seminar hosted by the church that I was attending that was conducted by two young-earth creationists, Dr John Morris and Dr Duane Gish. It was something of a ‘road-to-Damascus’ experience for me. I went with the attitude of “let’s see what these weird people have to say”. But I left with the attitude that these people were not the least bit weird. Rather, what they said made a lot of sense.9 I needed to find out more.

And so I did. And the more I found out, the more amazed I was at the consistency between the empirical evidence and the plain reading of the Bible as history. But more importantly, I learned things about science that I had not been taught in school and that have a profound influence on one’s perception of science—in particular, the alleged incompatibility of science and a plain reading of the Bible.

Science is all about doing repeatable experiments and not everything that is billed as science qualifies. Dr James Gunn is quoted in an article in Science as saying, “Cosmology may look like a science but it isn’t a science. … A basic tenet of science is that you can do repeatable experiments, and you can’t do that in cosmology.”10 In the same article, Dr Michael Turner, a theoretical cosmologist, is quoted as saying, “The goal of physics is to understand the basic dynamics of the universe. Cosmology is a little different. The goal is to reconstruct the history of the universe.”10

Data do not speak for themselves but need to be interpreted within a framework or paradigm—a set of assumptions about the nature of reality (see “This changes everything!”). Disciplines tend to get captured by a ‘ruling’ paradigm that forms the unquestioned framework for interpreting data. Inconsistent data are typically disregarded using various rationalisations or accommodated by ad hoc ‘adjustments’. Aristotle’s geocentric paradigm for the solar system ‘ruled’ cosmology for centuries, despite the need for myriad ad hoc ‘adjustments’. It was eventually replaced with Newton’s centre-of-mass paradigm, but not before Galileo was deplatformed by contemporaneous peer review.

Peer review, while advertised as ensuring the veracity of published material, does not actually do this. Numerous frauds have been documented (also here). Rather, it serves to enforce the orthodoxy of the ruling paradigm. This is well illustrated by the experience of Dr Mary Schweitzer, who first discovered soft tissue in dinosaur bones: “I had one reviewer tell me that he didn’t care what the data said, he knew that what I was finding wasn’t possible,” says Schweitzer. “I wrote back and said, ‘Well, what data would convince you?’ And he said, ‘None’”11 (see Double-decade dinosaur disquiet).

Truth is not determined by the number of people that believe something to be true. Neither is it proven by their positions in politics or academia, nor the amount of money spent on their viewpoints.

Cosmology, geology, and palaeontology/evolution are all attempts to reconstruct the history of the universe, the Earth and life on Earth respectively. They have all been captured by ruling paradigms—big bang, uniformitarianism, and neo-Darwinism respectively—that cannot be directly tested by repeatable experiments. These paradigms are all based on the philosophical assumption of naturalism—that nature is all that exists—that, a priori, decrees that God does not exist (or at least, made no practical difference to natural history). Peer review and the publication process ensure that no other perspective is allowed.

I can trust God’s Word to say what it means and mean what it says.

All three disciplines are replete with evidence that is inconsistent with the paradigm. For example, evidence from genetics clearly shows that mutations, rather than creating new and ever-more complex DNA as required by evolution, cause continuous degradation of DNA. Geneticist Dr John Sanford calls this genetic entropy and it eventually causes extinction. This happens so fast that humans simply cannot have existed for the length of time evolutionists assert. The presence of radioactive carbon in samples from essentially every layer in the geological column clearly indicates that these layers are not hundreds of millions of years old, because after 90,000 years (at most) radiocarbon would be undetectable. Soft tissue in dinosaur bones clearly indicates that these bones cannot be millions of years old, since biological tissue disintegrates rapidly. Astrophysicist Neil deGrasse Tyson has stated: “The scary part is that if none of us knew in advance that stars exist, frontline research would offer plenty of convincing reasons for why stars could never form.”12

The Bible contains an alternative account of the history of the universe, the Earth, and life on Earth provided by a reliable witness (God) and recorded by a reliable scribe (Moses). This is perfectly consistent with this evidence—and consistent with the preponderance of other evidence. Are there any inconsistencies? Of course. But these are not of the fundamentally contradictory nature like the ones just mentioned are for the hypothetical, reconstructed histories.13

The rational, most consistent conclusion from this evidence seemed to be that the Bible, as plainly read and understood, provided an accurate history of the Earth. Such a perspective has no effect on the study of those sciences, like physics, the goal of which is to understand the dynamics of the universe. After all, both these and the Bible come from God and so can be expected to be consistent. It does change the paradigm for interpreting data in the disciplines that reconstruct history—cosmology, geology, palaeontology, and evolution. But the current paradigms are restrictive, arbitrary, and unnecessary. However, this perspective does mean that I can trust God’s Word to say what it means and mean what it says everywhere throughout—including the promises of the gospel. I don’t need any man-made ‘secret decoder rings’ to tell me what God really meant to say—if only He had been smart enough.

So I (finally) became a young earth creationist.14 Here I stay, no longer “tossed to and fro by the waves and carried about by every wind of doctrine, by human cunning, by craftiness in deceitful schemes.” (Ephesians 4:14) 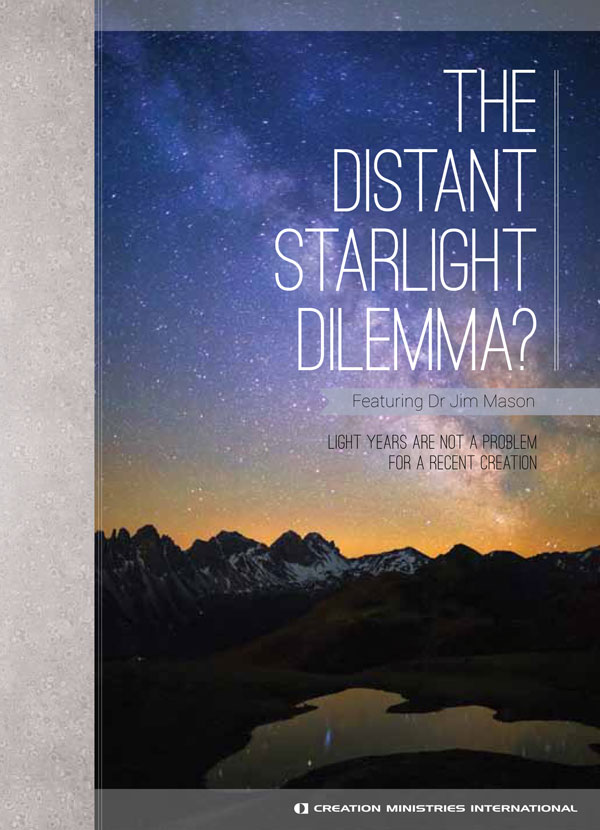