An analysis of the Ham/Nye debate

Creation was on the media’s radar again recently, thanks to the announcement that US media personality Bill Nye (best-known for his TV show ‘Bill Nye the Science Guy’) would go head-to-head in a debate with creationist Ken Ham at the Creation Museum in Kentucky.

Bill Nye was actually criticized by his fellow atheists for debating a creationist. Dr Jerry Coyne, professor of ecology at the University of Chicago, says that:

The response from the evolutionist side is clear: let’s not give creation any exposure.

“… he should just continue to write and talk about the issue on his own, and not debate creationists. By so doing, he gives them credibility simply by appearing beside them on the platform.”1

“I agree that to do this on Ham’s home turf was a mistake, and indeed it is almost always a mistake to give wingnuts the oxygen of publicity, and the respectability of being seen on a platform with a real scientist, anywhere.”2

A Chicago Sun-Times article was simply titled, “Bill Nye wastes his time debating creationists”.3 The response from the evolutionist side is clear: let’s not give creation any exposure. One wonders, if creationism is not science and can be easily debunked, what are they afraid of?

The overall reluctance of atheists to debate creationists was never more evident than in 2009 when the World Atheist Convention in Melbourne, Australia rejected CMI-Australia’s challenge to debate, as documented in this article. As our Australian office had a wealth of Ph.D. creation scientists on staff, and the leading lights in atheism would be converging in one place, it seemed to be an ideal time to match up. But as one commenter on notorious atheist PZ Myers’ blog said at the time:

“I think the extreme emotional reaction … to the idea of debating Creationists shows that the debate really isn’t about science vs. religion, but is one religious view-(Atheism) pitted against another.”4

We commend Ken Ham and Answers in Genesis for arranging this event, and as creationists, we celebrate the chance for the fair exchange of ideas. As shown above, this is something most atheistic evolutionists don’t want.

Some have noted that neither Ken Ham nor Bill Nye are scientists. But they are a good pairing; both are scientifically-minded laypeople who have spent the better part of their careers arguing for the account of origins that they believe is true. The fact that both men for years have aimed to make the origins issue understandable to a broad audience made this a unique opportunity for laymen to gain an understanding of the differences between these radically different worldviews.

Nye obviously loves science, and he did a particularly good job of bringing that across. He also communicated the practical benefits of a good understanding of science, and its importance for our future.

Ham should be applauded for his strong presentation of biblical authority and presentation of the Gospel throughout. He had a limited amount of time to present his views to a large audience which would have included many unbelievers, some of whom may have never heard this information. This was a valuable opportunity that creationists rarely encounter.

The final question in the question and answer section was revealing as far as demonstrating the worldview of both debaters. They both were asked the one thing upon which they based their belief. Ken Ham unequivocally stood on the authority of Scripture. Bill Nye professed that science and a love of discovery is what guides him.

Ken Ham’s 30-minute presentation covered the basics of the creation worldview, including the creation time-frame, the difference between operational and historical science, and the difference between natural selection and evolution of new kinds. He demonstrated how the biblical record explains the phenomena we see in the world today, such as intelligent design behind life, animals reproducing after their kind, and all humans as one race.

What caught our attention more than anything else was Bill Nye’s list of challenges for his opponent. He went through a long list of arguments that supposedly pose problems for creationists. However, if Nye had been more acquainted with creationist literature, he would have known that we have long had explanations for each of these.

Another assertion Nye made multiple times was that creationists do not make predictions. However, this is demonstrably false. For instance, cosmologist Dr Russell Humphreys predicted that Mercury’s magnetic field would display specific characteristics based on biblical assumptions about its origin and age, which were proved correct; see Mercury’s Magnetic Field is Young! And another team of creation scientists made predictions about the amount of helium left in zircons based on a young age, which was proved accurate; see RATE group reveals exciting breakthroughs!

The 5-minute rebuttal was insufficient for either debater to respond to the other’s 30-minute presentation, which is one reason why the debate might not be the best measure of who has the best arguments. For instance, Ken Ham made a telling point, that the atheistic worldview can’t account for logic and reasoning, while the Christian worldview can, because we are made in the image of a rational God (indeed, Jesus is called the logos). However, the subtlety of the argument seemed totally lost on Nye, and probably a lot of listeners too, unfortunately. That is, if our brain is the result of natural selection, then why should we even trust our reasoning to be logical (or our senses to be accurate, as Nye claims)? It would probably have been better to argue that Darwinian processes select only for survival value, no matter how false or illogical our thoughts (or senses) are. See how C.S. Lewis made this point decades ago; cf. Loving God with all your mind: logic and creation.

That being said, neither seemed to sufficiently acknowledge or answer the other’s challenges. For instance, Ken Ham spent a good part of the beginning of his presentation showing examples of creation scientists who have made real contributions to their fields, but Bill Nye ignored these examples and kept repeating his argument about the importance of evolution in education to produce engineers and scientists.

Nye seemed either ignorant or deceptive regarding his depiction of creation science, as every argument he presented has been dealt with at length in creation publications that are widely available. And his mantra about evolution being necessary for scientific advancement is demonstrably false. He also repeatedly characterized biblical creation as “Ken Ham’s view” ignoring the growing number of qualified, successful PhD scientists who have made outstanding contributions and who recognize the Bible’s account of origins as historical.

In response to Ham’s comment that evolutionists conflate terms, that is, using the term ‘evolution’ to include aspects of operational science, Nye kept restating that it is only creationists who use the distinction between operational and historical science. But this is simply not true (should we be surprised) because it is evolutionists who make this distinction themselves. For example the prominent atheistic, evolutionist Harvard Professor, Dr E.O. Wilson said:

“If a moving automobile were an organism, functional biology would explain how it is constructed and operates, while evolutionary biology would reconstruct its origin and history—how it came to be made and its journey thus far.”5

This is not an isolated quote. Prominent atheistic biologist Ernst Mayr wrote:

“Evolutionary biology, in contrast with physics and chemistry, is a historical science—the evolutionist attempts to explain events and processes that have already taken place. Laws and experiments are inappropriate techniques for the explication of such events and processes. Instead one constructs a historical narrative, consisting of a tentative reconstruction of the particular scenario that led to the events one is trying to explain.”6

Nye is also not a Bible scholar, as his limited comments about Bible translation and interpretation show. He claimed that the Bible was translated in a way analogous to the ‘telephone game’. However, we have more manuscripts of the Bible than for any other ancient book. For more information, see How did we get our Bible—and is it the Word of God?

Ham could have been more assertive in demanding answers to his arguments and holding Nye’s feet to the fire when he failed to respond to his challenges. He also could have challenged the foundations of the evolutionary worldview more effectively if he had been given more time to do so.

This debate will probably be insufficient to ‘convert’ many from one view to the other. While people love debates due to their adversarial nature, it may not the best format in which to hash out the issues in sufficient depth due to time restrictions. Debates are great for bringing the subject to people’s attention, but not for training and equipping. What’s important is what happens in the days and weeks to come.

What’s next? What can I do?

This event demonstrated that ultimately the controversy is not really about science.

One report estimates that over a million people tuned in and watched a debate about creation vs. evolution. The turnout shows that it is by no means a ‘settled issue’ in the minds of laypeople, regardless of what the media portrays or how much the evolutionists want to control the turf and censor other views.

This event demonstrated that ultimately the controversy is not really about science. This hot topic issue is about the two opposing worldviews of creation and evolution. As such, it’s vitally important for believers to ‘be prepared to give an answer…with gentleness and respect’ (1 Peter 3:15). Many people disbelieve the Bible because their view of origins excludes the biblical account and thus, the Gospel. We have found that creation evangelism is an effective way to reach people with the Gospel; why not give a college student in your life a subscription to Creation magazine to counter the evolutionary indoctrination he or she will encounter from professors?

Sadly, not all Christians, by any means, understand the importance of this issue, which is one reason CMI’s main ministry focus is speaking in churches. Why not introduce to your pastor the opportunity to host one of our speakers and create an impact at your church? Our speakers’ creation messages highlight the bankruptcy of evolution, and explain how a biblical view of creation is relevant and how it is foundational to the Gospel.

Finally, pray for the ongoing impact that the debate will have in the days and weeks to come, and for the hearts of people who may have heard evidence for creation for the first time as a result of the debate.

What will a CMI presentation do for your church?

CMI will present challenging and motivating messages that equip believers to impact their world. And remember, we want the message to reach as many as possible, so we have no set speaker fees. 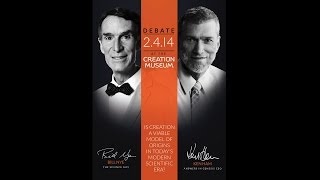